Though he is widely recognized for his remarkable grasp of didactic theology, Shaykh Muḥammad Zāhid al-Kawtharī (d. 1952), the last deputy of the Ottoman Shaykh al-Islam, was a master of many sciences, particularly hadith. His annotations on ʿAbd al-Ḥayy al-Kattānī’s acclaimed catalogue of hadith transmission, Fihris al-Fahāris, speaks volumes about his erudition in the hadith sciences. In the mid-twentieth century, Kawtharī wrote a letter to the then Shaykh al-Azhar, Muṣṭafā ʿAbd al-Rāziq (d. 1947), detailing his vision of how the study of hadith should be reformed at one of the most prestigious seats of Islamic learning.

Having spent the last decades of his life in Cairo—after fleeing from the Republican militias of Ataturk in 1922—Kawtharī was intimately familiar with al-Azhar’s educational system, and his expertise in hadith made him an ideal candidate to propose any drastic overhaul of its hadith curriculum. Due to the unfortunate passing of Muṣṭafā ʿAbd al-Rāziq in 1947, the necessary steps towards the suggested reform were not taken. The letter was penned with al-Azhar in mind, but the pedagogical reform that it proffers is an invaluable asset to any institution or individual interested in a serious study of hadith.

Hereunder is an abridged translation of this letter. Kawtharī offers a total of ten advices, prefaced with an introduction extolling al-Azhar, emphasizing the need for Islamic seminaries to nurture students both academically and spiritually, and highlighting the importance of adopting a scholarly persona that aligns with the ethos of Islam. This idiomatic translation covers only the relevant section of the letter, leaving the other parts for another occasion. Death dates and headings were added to facilitate an easier and more informed read. To appreciate the nuances of Kawtharī’s proposal, readers are encouraged to consult the original letter, entitled Iḥyāʾ ʿulūm al-sunna fī al-Azhar, found in his collection of essays.

A Letter to the Shaykh al-Azhar

It is with great satisfaction that we have come to learn that the respected scholar [Muṣṭafā ʿAbd al-Rāziq] intends to reform the hadith curriculum at al-Azhar in an effort to curtail the negative reaction against those in charge of this matter due to their constant inattention in this regard. They have allowed their graduates to wander in confusion in the face of conflicting hadith. These graduates are unable to distinguish the reliable from the unreliable nor are they able to prefer one route over another through a sound methodology. They cannot adequately respond to the aggression of those who ardently criticize the sanctity of Islam and its formative history. They fail to identify hadith that are suitable to clarify what is abstract or explicate what is elusive in scripture. This is unbecoming of a classical seat of learning like al-Azhar that has led—and will continue to lead—Muslim delegations for centuries. […]

To proceed, here is what I have to say:

The study of the primary sciences, such as tafsir and hadith, should be held in the Azhar Mosque. Only then can the lessons of hadith be conducted after the prayers without the interruption of bells or alarms. This will help maintain the seriousness of the lesson, motivate students to pray in congregation, and allow the instructor to deliver the class-lecture in its entirety without having to count the minutes. After determining a curriculum that meets the objectives of al-Azhar, secondary subjects can be scheduled at times when there is no commotion or disruption.

A room in al-Azhar should be dedicated for conducting research. It should contain the multitude of works in the genre of hadith and related sciences from libraries throughout the world, so that they are accessible to the instructors and the students. Students should be tasked with conducting research on nuanced topics related to hadith. This will motivate them to frequent the research room. There should be deadlines to submit their research to kindle the spirit of scholarly competition. This process will help students progress in their educational journey and it will lead to a proliferation of academic output—with the permission of Allah. The India-based Dār al-Muṣannifīn has produced countless academic works; consequently, the Nadwīs are favorably mentioned in scholarly circles worldwide. An index should be prepared, detailing the specific books that need be present in this room. The following are some examples:

The curriculum should incorporate a study of the six canonical books of al-Bukhārī (d. 256 AH), Muslim (d. 261 AH), al-Nasāʾī (d. 303 AH), Abū Dāwūd (d. 275 AH), al-Tirmidhī (d. 279 AH), and Ibn Mājah (d. 273 AH). This study should be accomplished via uninterrupted recitation (sard) per the protocols of transmission (riwāya). Only certain passages should be explained, avoiding thereby extensive commentary, to allow for a complete reading in a short period of time. There should also be a study of Mālik’s (d. 179 AH) Muwaṭṭaʾ via the recensions of al-Shaybānī (d. 189 AH) and al-Laythī (d. 234 AH); al-Ṭaḥāwī’s (d. 321 AH) [Sharḥ] Maʿānī al-āthār and Sunan al-Shāfiʿī; and Muḥammad ʿĀbid al-Sindhī’s (d. 1257 AH) Tartīb mukhtaṣar Musnad Abī Ḥanīfa and Tartīb Musnad al-Shāfiʿī.

A specific instructor should be assigned to teach each of these texts via transmission. Students should attend the study of a particular text until its completion; the same applies to the other texts. Upon the completion of one text, students should move on to the next. As for the method of instruction, the student immediately to the right of the instructor will read about a page audibly with composure. The next student will do the same, until all the students have read. The instructor is expected to correct the students when they err, and the others should take note of the correction.

The instructor is responsible for the accurate vowelization of the chain and text in light of reliable manuscripts that were utilized by hadith experts and vowelized per the protocols of transmission. No leniency should be tolerated in regard to the vowelization of names, patronyms, and honorifics. Students should be encouraged to investigate the correct vowelization in the relevant resources available in the research room. Shorter manuals on biographical information should be distributed among students, like Ṣafī al-Dīn al-Khazrajī’s (d. after 923 AH) Khulāṣat Tadhhīb al-Tahdhīb, Ibn Ḥajar’s Taqrīb al-Tahdhīb, and Muḥammad b. Ṭāhir Pattanī’s (d. 986 AH) al-Mughnī.

Commentary should be limited to certain words without delving into detailed discussions to allow for an efficient completion of the texts. Students are more in need of correct vowelization (of names and words) and brief explanation of certain passages. Extensive commentary is unnecessary; this can be readily accessed in the commentary literature.

For hadith terminology (muṣṭalaḥ al-ḥadīth), a scholar should summarize al-Sakhāwī’s (d. 902 AH) commentary on al-ʿIrāqī’s Alfiyyat al-ḥadīth. To make this summary comprehensive, it should incorporate the various opinions of the jurists regarding hadith terminology and verification. In the meantime, the instructor should teach Ibn Ḥajar’s commentary on Nukhbat al-fikar with select nuggets from Qāsim b. Quṭlūbughā’s gloss as well as ʿAlī al-Qārī’s (d. 1014 AH) and Muḥammad Akram al-Sindhī’s (d. ca. 11th century AH) respective commentaries. The following texts are of utmost importance: al-Rāmahurmuzī’s al-Muḥaddith al-fāṣil bayna al-rāwī wa-l-wāʿī, the earliest work in the field; Qāḍī ʿIyāḍ’s al-Ilmāʿ; Ibn Daqīq al-ʿĪd’s (d. 702 AH) al-Iqtrāḥ; al-Khaṭīb’s (d. 463 AH) al-Kifāya; and al-Ḥākim’s (d. 405 AH) Maʿrifat ʿulūm al-ḥadīth—notwithstanding the undeveloped content found in the last two. The instructor should seize the opportunity to instill the importance of this science in the hearts of the students and help them progress to an advanced stage by highlighting the problems that one with shallow knowledge of hadith will face regardless of one’s expertise in other sciences.

An instructor should be assigned to the topic of fabricated hadith. This class should be based on Ibn ʿIrāq al-Kinānī’s (d. 963 AH) Tanzīh al-sharīʿa al-marfūʿa ʿan al-akhbār al-shanīʿa al-mawḍūʿa, a phenomenal and unique work. It has a brilliant introduction on hadith fabrication and fabricators, adapted from Ibn al-Jawzī’s al-Mawḍūʿāt with additional material. It also contains Sibṭ b. al-ʿAjamī’s (d. 884 AH) al-Kashf al-ḥathīth ʿamman rumiya bi-waḍʿ al-ḥadīth, given that the study of hadith fabrication requires knowledge of the narrators accused of fabrication. After exploring the remaining works on fabricated hadith—bearing in mind the hastiness or caution of the respective authors—a more comprehensive and rigorous book can be written for the benefit of a wider audience.

An instructor should be assigned to teach the laws and scholarly opinions regarding disconnected hadith (marāsīl) after exhaustive preparation. The instructor should draw upon Ibn Abī Ḥātim’s introduction to al-Jarḥ wa-l-taʿdīl and al-Marāsīl; al-ʿAlāʾī’s Aḥkām al-marāsīl, the most useful and comprehensive work in its explanation of the juristic opinions regarding disconnected hadith; and Ibn Rajab’s Sharḥ ʿIlal al-Tirmidhī, among other works. Moreover, attention should be given to the suspended hadith (muʿallaq) in Ṣaḥīḥ al-Bukhārī, the disconnected hadith in Ṣaḥīḥ Muslim, and the research of the experts on these two issues. For a holistic treatment of the subject, hadith of this nature found in the Muwaṭṭaʾ and the four Sunan should also be examined.

An instructor should be assigned to teach Ibn al-Jawzī’s al-Taḥqīq and Ibn ʿAbd al-Hādī’s Tanqīḥ al-Taḥqīq through a comparative analysis of the evidences of the jurists. Students should strive to reach a sound conclusion from the debates on the narrator criticism of the hadith adduced by the various jurists. The same should be done with Ibn Himmāt’s (d. 1175 AH)Tuḥfat al-Rawī, a takhrīj of the hadith in al-Bayḍāwī’s (d. ca. 685 AH) exegesis, alongside al-Zaylaʿī’s (d. 762 AH) and Ibn Ḥajar’s respective takhrīj works on the hadith in al-Kashshāf. Students will thereby develop proficiency in dealing with hadith in the exegetical literature.

8. Critical Study of Sīra and Maghāzī

An instructor should be assigned to teach sīra and maghāzī after writing a refined book on the subject in light of the principles of narrator criticism. The crux of these discussions should be presented to the students to unveil the intentions behind the onslaught of the Orientalists under the pretense of objective research. Shiblī Nuʿmānī’s (d. 1914) and Sulaymān Nadwī’s (d. 1953) voluminous work filtering the unreliable narrations found in the Prophetic biography has filled a void in exposing and responding to the Orientalists. An Arabic translation of this work—currently in Urdu and already translated into English and Turkish—with a correction of its shortcomings will serve as a beneficial contribution and a rejoinder to the machinations of Leone Caetani (d. 1935), Ignác Goldziher (d. 1921), and their ilk.

Seminars should be held on select topics of hadith, such as identifying hidden defects (iʿlāl al-ḥadīth), causes of occurrence (asbāb al-wurūd), abrogation, methods of report verification, obfuscation (tadlīs), the history of the compilation of hadith, reports of the hadith experts, mukhaḍrams, obfuscators, and the senile, and a survey of seminal works on the vowelization of names, honorifics, patronyms, and affiliations. This will inspire students to excel in these topics and then publish related books.

A committee should be formed to respond to Orientalist critiques. A separate department should be dedicated for this purpose to repel the aggression of the critics via compelling arguments and exhaustive research. Scholars of al-Azhar should not translate the books of these authors without providing a thorough refutation of the baseless views found therein. In fact, responses should be written in the language of the original work and distributed in those countries; then they should be translated and distributed in Muslim lands.

These are some thoughts that have come to mind. It is hoped that they are beneficial and serve as a corrective to what has gone askew. It is Allah who grants guidance to those who seek it, and to Him belongs all praise in this life and in the next. 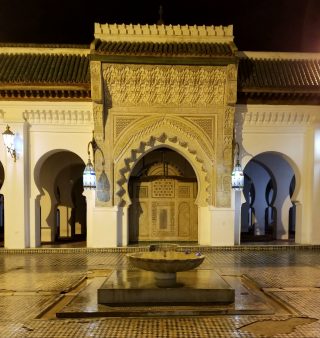