“I am from the partisans of Ḥadīth, and they are the best of parties. I have passed the age of ninety, and I hope to pass a hundred.”[1]

[Note: This article is being reposted after receiving news of the tragic passing of our dear Shaykh ʿAbd al-Raḥmān al-Kattānī on December 5, 2022. May Allah elevate his status and fill his grave with light, āmīn!]

The epithet ruḥla is an interesting designation coined by scholars for someone who is considered a destination for academic travel.[2] In the 4th century AH, al-Maḥbūbī (d. 346 AH), for instance, was deemed the sole destination for transmitting Jāmiʿ al-Tirmidhī.[3] At the turn of the 8th century AH, when news spread that the Damascene Abū al-ʿAbbās al-Ḥajjār (d. 730 AH) had attended an audition of Ṣaḥīḥ al-Bukhāri under al-Ḥusayn al-Zabīdī (d. 631 AH) as a child, he quickly rose through the ranks of stardom: no longer an ordinary stonemason, he became one of the most highly sought-after transmitters of Ḥadīth in the Mamluk realm.[4] The fascination of Ḥadīth scholarship with elevated chains for over a millennium is encapsulated in Yaḥyā b. Maʿīn’s (d. 233 AH) final wish: “an empty home and an elevated chain (bayt khālī wa sanad ʿālī).”[5]

Among the living legends of our time is Shaykh ʿAbd al-Raḥmān al-Kattānī, who is celebrated for his exceptionally elevated chains of transmission for Ḥadīth. He is more widely recognized as the last surviving son of arguably the most prolific Ḥadīth transmitter of the twentieth century: ʿAbd al-Ḥayy al-Kattānī (d. 1962).[6] I had the opportunity to visit Shaykh ʿAbd al-Raḥmān at his home in Fez, Morocco alongside some students of knowledge. Despite his deteriorating health, he was gracious enough to let us recite the opening ḥadīth of Ṣaḥīḥ al-Bukhārī and other narrations to him. He then penned an authorization (ijāza) for us, appended below. 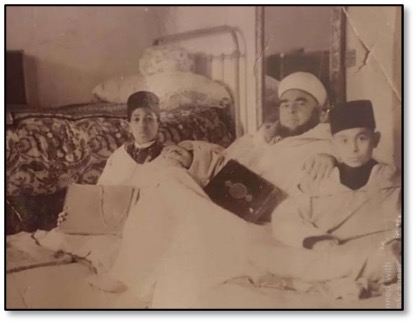 ʿAbd al-Raḥmān al-Kattānī was born in Ṣafar 1338 AH/November 1919 CE; he just passed his hundredth birthday. [7] His father was his most formative mentor. He read/heard Ṣaḥīḥ al-Bukhārī to him roughly six times, Ṣaḥīḥ Muslim, al-Muwaṭṭaʾ, Alfiyyat al-ʿIrāqī, among other works. He also heard Ḥadīth from his uncle Muḥammad b. Jaʿfar al-Kattānī (d. 1927). He studied Mālikī law, theology, and other subjects at the prestigious University of al-Qarawiyyīn. Throughout his extensive travels, his father ʿAbd al-Ḥayy made it a point to request preeminent scholars of his time to grant him and his children authorization in Ḥadīth. Consequently, Shaykh ʿAbd al-Raḥmān received general authorization from a number of leading scholars, such as Aḥmad Riza Barelwī (d. 1921), Ḥassūna al-Nawāwī (d. 1925),[8] Abū al-Khayr ʿĀbidīn (d. 1925), Yūsuf al-Nabahānī (d. 1932), Badr al-Dīn al-Ḥasanī (d. 1935), and Muḥammad Bakhīt al-Muṭīʿī (d. 1935).[9] 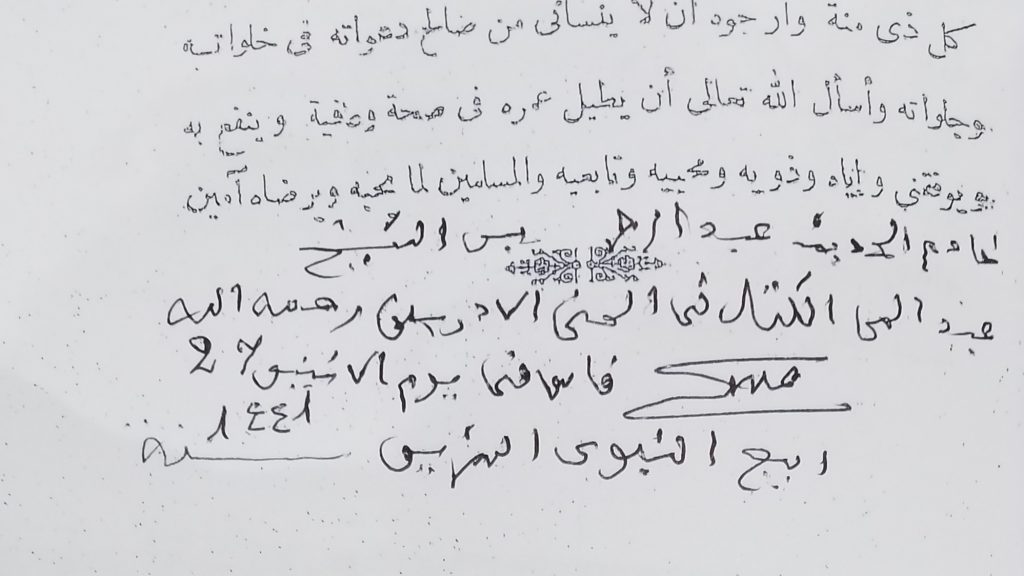 During one of his pilgrimage travels, the late Shaykh Yūnus Jawnpūrī (d. 2017) got wind of Shaykh ʿAbd al-Raḥmān’s presence during that pilgrimage. With the help of his students, Shaykh Yūnus undertook an arduous journey to obtain authorization of Ḥadīth from him. He would later boast that he met a student of Muḥammad b. Jaʿfar al-Kattānī, the author of al-Risāla al-Mustaṭrafa, and obtained authorization from him.[11]

Given how active and engaging of a host he was—he actually sang poetry with us—he seemed much healthier than people his age. His state is reminiscent of Sufyān b. ʿUyayna’s (d. 198 AH) observation that anyone who pursues Ḥadīth will have a glow on his face,[12] as evidenced by the Prophet’s (ṣ) supplication, “May Allāh brighten the face of the one who hears my words and preserves them until he transmits them to others exactly as he heard them.”[13] Due to his relatively poor health and other factors, getting an opportunity to recite Ḥadīth to him may not be as feasible as one would wish. Shaykh Yūnus once aptly observed, “Scholars maintained that Ḥadīth audition (samāʿ) was a form of sustenance (rizq).”[14] We pray that Allāh grants him a long and healthy life and makes him a source of benefit for one and all. [15]

[1] His wish came true, and he passed a hundred years of age. Until his final moments, he would listen to Ḥadīth and point out subtle errors in the reading of students. See al-Dhahabī, Siyar Aʿlam al-Nubalāʿ, 21:7; Abū Ghudda, Ṣafaḥāt min Ṣabr al-ʿUlamāʾ, 94.

[4] Garrett Davidson, Carrying on the Tradition: An Intellectual and Social History of Post-Canonical Ḥadīth Transmission, 63-65.

[14] He mentioned this after lamenting his inability to meet with the renowned Meccan musnid Yāsīn al-Fādānī (d. 1990). See al-Nadwī, al-Farāʾid, 64.

[15] This post should not be misunderstood as a call for seeking out ijāzāt without any grounding in knowledge. On the harms of certain trends of seeking out authorization that have recently gained traction, see ʿAwwāma, Maʿalim irshādiyya, 188-194.